As the court-martial of Bradley Manning got underway at Ft. Meade near Washington on Monday June 3, supporters rallied and sat in the courtroom to witness the proceedings and register their silent protest by wearing black t-shirts with the simple word “truth” in bold white letters. One of those supporters was Oklahoma activist Rena Guay.

A report from the Bradley Manning Support Network gave an overview of the week’s testimony,  support activities and media coverage.

After a grueling 3 years in prison awaiting trial, 3 time Nobel Peace Prize nominee Bradley Manning’s court martial has begun. Supporters held actions in solidarity with the heroic whistleblower. On June 1st the largest rally of supporters yet was held at Fort Meade, and throughout the week more than three dozen events were organized around the world.

On the first day of the trial the defense and prosecution faced off with opening statements that both asked “what would you do” if you were given access to evidence of the true nature of the war, civilian murders, illegal torture, unnecessary secrecy and thousands of documents revealing government corruption? What would you do if your reports to superiors were ignored, and if you learned that the American people had been lied to?

In his opening arguments defense lawyer David Coombs highlighted that Bradley Manning is not your typical soldier – rather he is a conscientious soldier who cared more than most about people, fellow soldiers and Iraqi civilians alike. Bradley Manning, he explained, is a “Humanist,” who prior to deploying to Iraq had that printed on his dog tags as his religious preference. For Bradley Manning the horrors of civilian and his fellow soldier’s deaths were troubling and transforming: it inspired him to learn the truth about the war, a war that we now know, thanks in part to Bradley and the whistleblower website WikiLeaks, has been based on lies.

The report also noted that

Bradley Manning and supporters received a lot of positive press over the week. The New York Times highlights supporter efforts in its article “Manning’s supporters are loud and online!”, while Rolling Stone magazine rips into media outlets that failed to understand Bradley’s motives, or to grasp the big picture: “The debate we should be having is over whether as a people we approve of the acts he uncovered that were being done in our names.” And former US Representative Dennis Kucinich takes Bill O’Reilly to task, defending Bradley Manning’s actions on the Bill O’Reilly factor. Watch the video here.

Transcripts of the trial are now available thanks to the Freedom of the Press Foundation who have hired a stenographer. Throughout three years leading up to this court martial no transcripts have been issued from the numerous pre-trial hearings. It has been up to bloggers, journalists, and Bradley’s supporters to take notes by hand in court. The hiring of a stenographer by the public brings a touch of transparency back into the court. Read transcripts from the first week.

Nathan Fuller, on behalf of BMSN, has filed full reports on every day of the trial and will continue to do so. His reports can be found in the “courtroom notes” category on the Network’s website. 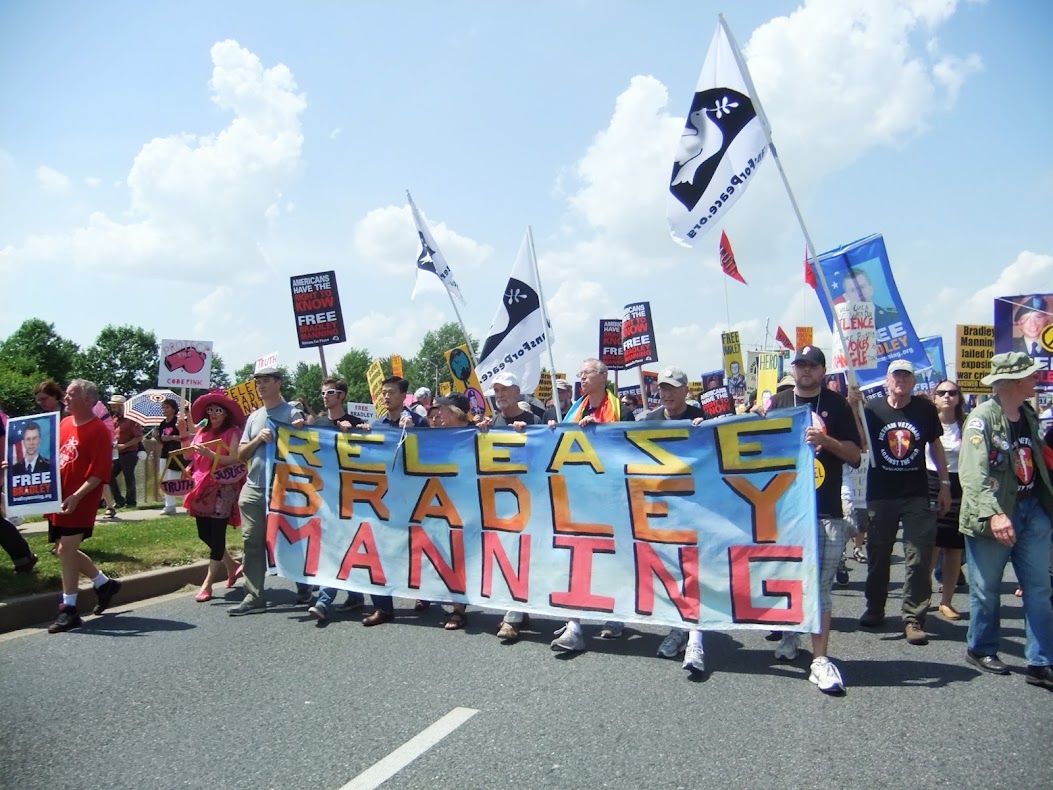 Rena Guay traveled from Oklahoma City to the DC area specifically to attend the June 2 rally and to sit in the courtroom at the beginning of the trial. She is the executive director of the Oklahoma Center for Conscience and Peace Research, which is a member of the support network and has organized several events in Oklahoma to show support for the Crescent, Oklahoma, native. The gropu also nominated Manning for the Nobel Peace Prize. Her trip was funded by the OCCPR and the Military Law Task Force.

“I felt it was important to have someone from Oklahoma there as the long-awaited court-martial finally begins, and there is heightened attention on the case,” Rena said. “At the rally, I loudly called out ‘Oklahoma!’ when Col. Anne Wright asked from the stage where attenders had come from to be part of the event. She repeated it after me, and I hope that it gets back to Bradley that someone from his home state was there, representing many Oklahomans who are concerned about him, who think he is a hero for exposing war crimes, and who will keep showing our support publicly.”

The entire album of photos Rena took at the Saturday June 2 rally outside the gates of Ft. Meade can be viewed here.

END_OF_DOCUMENT_TOKEN_TO_BE_REPLACED

Bill Moyers interviews the youth who is suing. This lawsuit, Juliana v. USA, was livestreamed from the courtroom of the 9th Circuit. It establishes that young people have a constitutional right to “a climate system capable of sustaining human life.” That r... END_OF_DOCUMENT_TOKEN_TO_BE_REPLACED

Some OU students will vote for Clinton with no real motivation